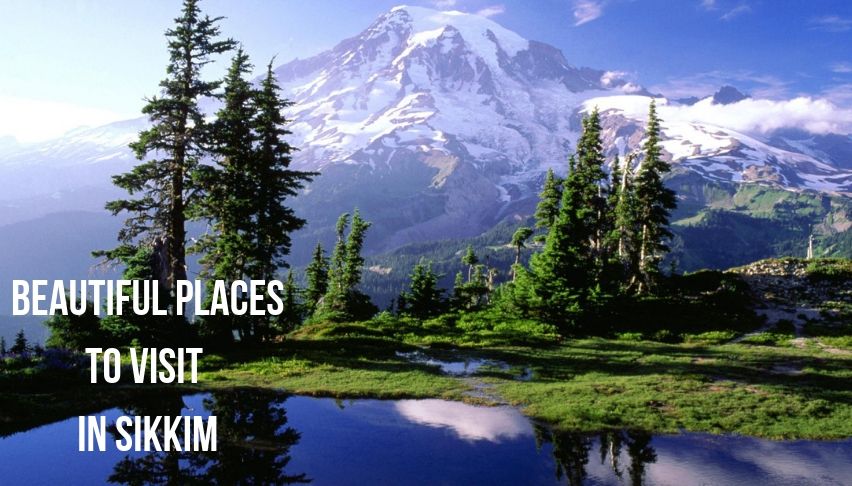 Beautiful places to visit in Sikkim

Sikkim is surrounded by vast stretches of Tibetan Plateaus in the north, the Chumbi Valley of Tibet and the Kingdom of Bhutan in the east, the Kingdom of Nepal in the west and Darjeeling district of West Bengal in the south.

Some of the most beautiful places to visit in Sikkim are following :

Tsomgo lake which is located just 38 km away from the capital city of Sikkim, Gangtok, is among the most popular tourist places in Sikkim. A snaky road through rocky mountain topography and strident mountains which takes you to the Tsomgo Lake is a lot of adventure in itself. If you are looking for best places to visit in East Sikkim then, you must explore this place on your trip.

• The beautiful flowers such as Primulas, Blue and Yellow Poppies, and Irish

Start early to avoid late night travel; and roads are not properly laid out

Jan to Mar – for snow; April to May – for Rhododendrons and Orchids; and Oct to Dec.

Lachen is a distant village in North Sikkim and the winter home for Tibetan nomadic tribes. Lachung is also a high altitude village of Tibetan and Bhutia people in North Sikkim. And Yumthang is a beautiful valley bounded by snowcapped mountains. All three are extremely beautiful tourist places in Sikkim . One must visit Lachung as it is the most famous among the list of places to visit in North Sikkim and for experiencing snowfall in Sikkim.

• The picturesque journey from Lachen to Gurudongmar Lake

• Gurudongmar Lake which is often frozen in winters

Take a taxi from the nearest railhead in New Jalpaiguri (Siliguri). The nearest airport is Pakyong airport.

March–June is pleasant; and December–January for snowfall

Gangtok is the capital city of Sikkim and has loads of gems in its kitty; you would be awestruck by the never ending walking trails, gorgeous silver-fir trees and most importantly the hospitality by the locals. Make sure it is on your list of places to visit in Sikkim.

• Paragliding in the valley

• Bird eye view from the ropeway

Take a cab for 148 km from New Jalpaiguri railway station. The nearest airport is Pakyong airport

Second most-visited attraction after Gangtok, Pelling will sweep you away with its lush forests and varied wildlife. Since it is a small town, you can easily discover it on foot. It provides a plenty of sightseeing opportunities.

Even though the road conditions are fine, it is best to take a sumo vehicle to reach here.

Namchi is blessed with fresh air which is fragmented with the aroma of lush flora. The beautiful sight of snowcapped mountains and the woodland mountain valleys adds to the scenery and makes it an important spot amongst the places to visit in South Sikkim.

Roads are not properly laid out

Take a cab for 77 km from the Jalpaiguri metro station

Furrowed by dense forests and outstandingly balanced on a ridge superintending an extensive swish of western Sikkim, Ravangla assures one of the most beautiful mountain views. It is a popular tourist place in Sikkim and draws many nature lovers every year.

Take a cab ride after Jalpaiguri station, which is 94 km from Ravangla

Yuksom is an old historic town, which is considered to be amongst the best places to visit in West Sikkim bestowed with natural beauty and uninterrupted trail for trekkers. If you are looking forward to spending some quiet moments in the shadow of nature away from the hustle bustle of the city, then this is it.

• The oldest monastery the Dubdi Gompa

Poor lighting on the roads

6 to 7 hours by road via Jorethang from Jalpaiguri, the nearest railway stop. The nearest airport is Pakyong airport.

March to June and September to November